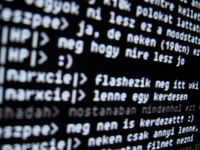 I recently re-built my work laptop to run openSUSE due to continual crashes of GNOME Shell on my Ubuntu GNOME 17.04 spin.  One of the apps that we use at work is Atlassian’s HipChat client.  HipChat has an artifactory repo where you can download the rpm bundle for use on CentOS, openSUSE, Fedora, etc.  After installing the client I was presented with a blank screen on launching the app.

I tried the flag to disable the GPU support, as I had seen that as one solution for a few Ubuntu users, but that wasn’t the solution.

What I was seeing in the logs turned out to not be an issue with the GPU, but an issue with the built-in version of Qt5.  It turns out that there is a bug with respect to running 32-bit sandboxed apps on a 64-bit OS.

The solution is to add the following value to the arguments passed in on line 4 of the QtWebEngineProcess file located in the /opt/HipChat4/bin directory of the HipChat install:

1 thought on “Workaround for HipChat on openSUSE”

This site uses Akismet to reduce spam. Learn how your comment data is processed.